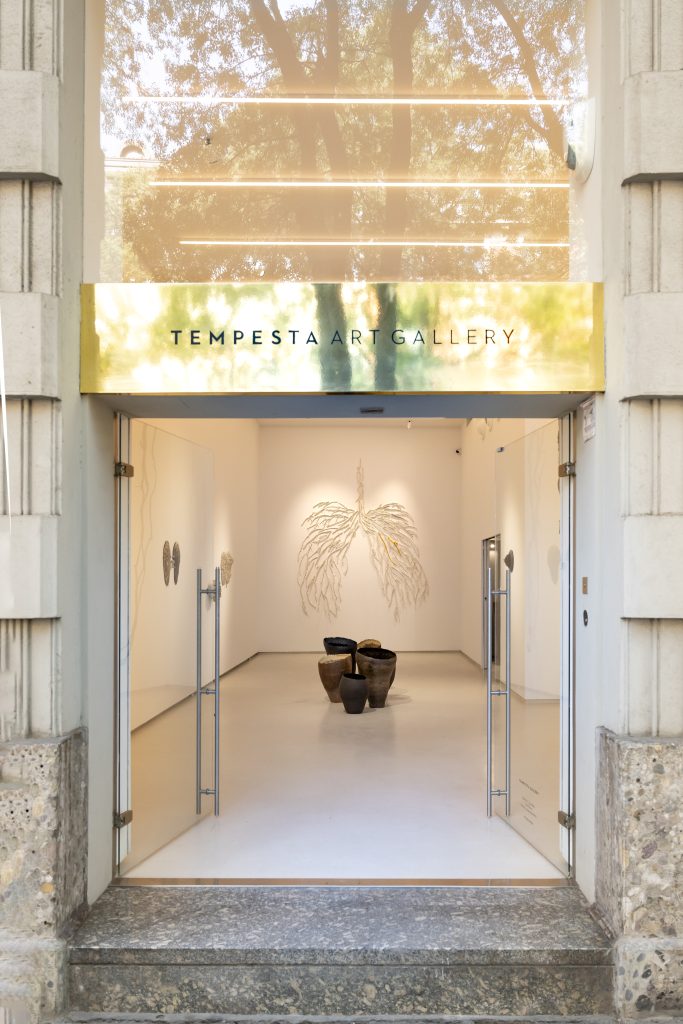 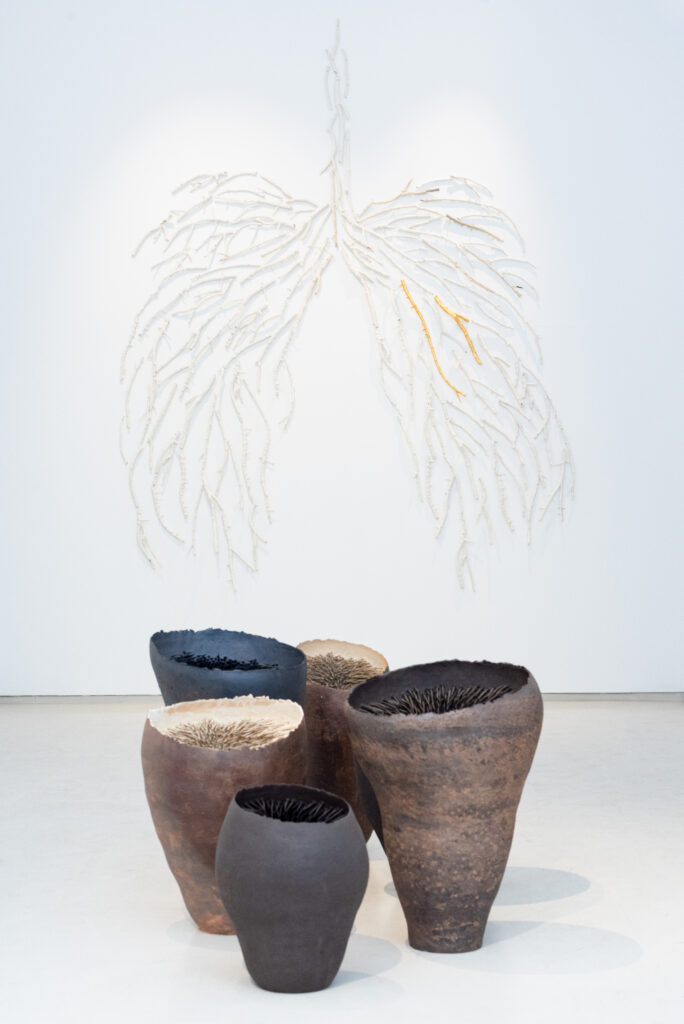 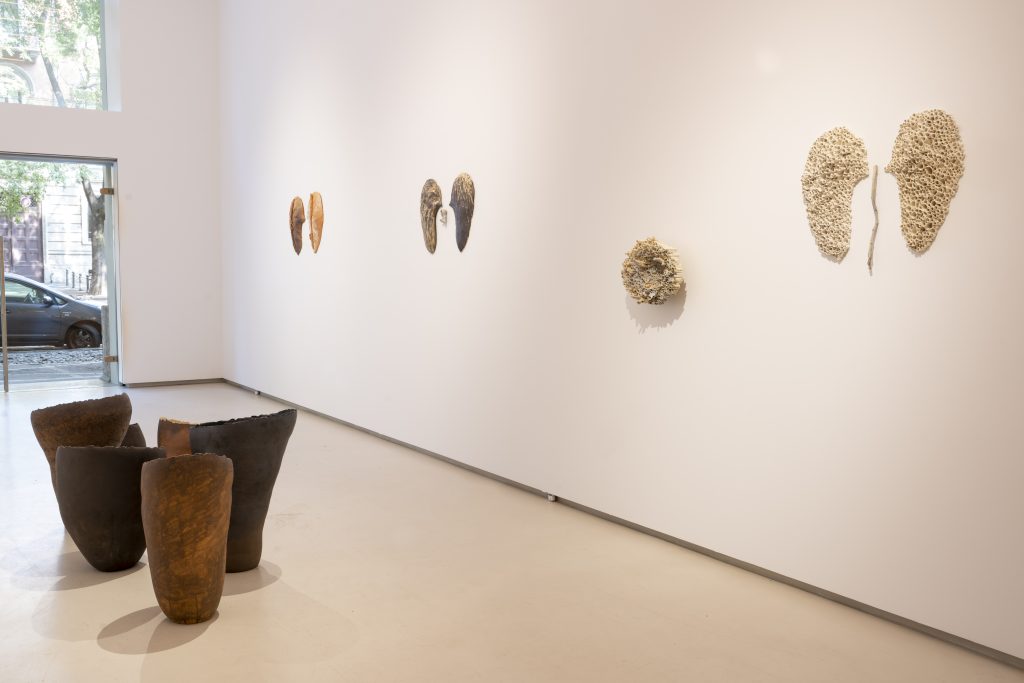 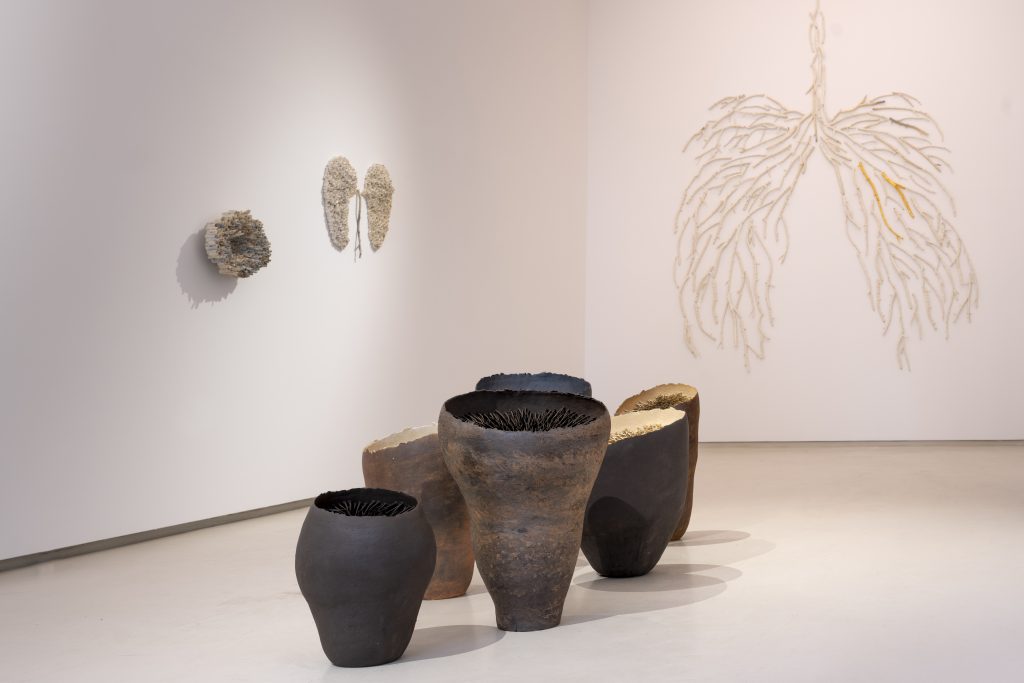 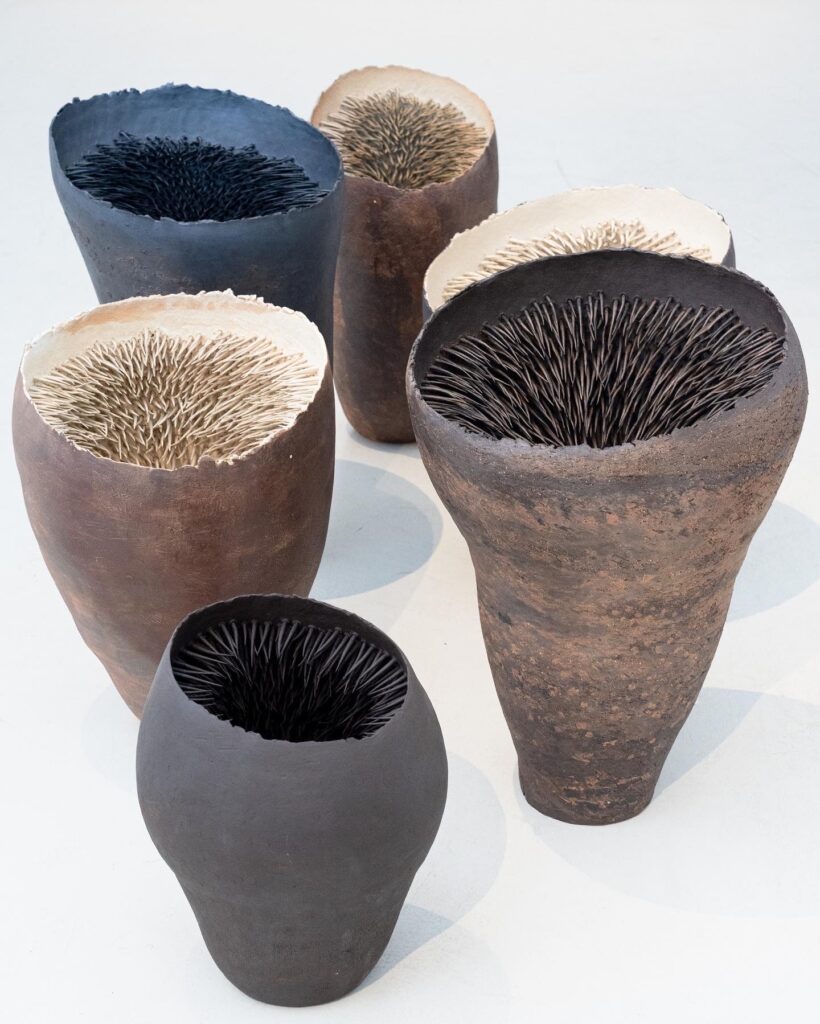 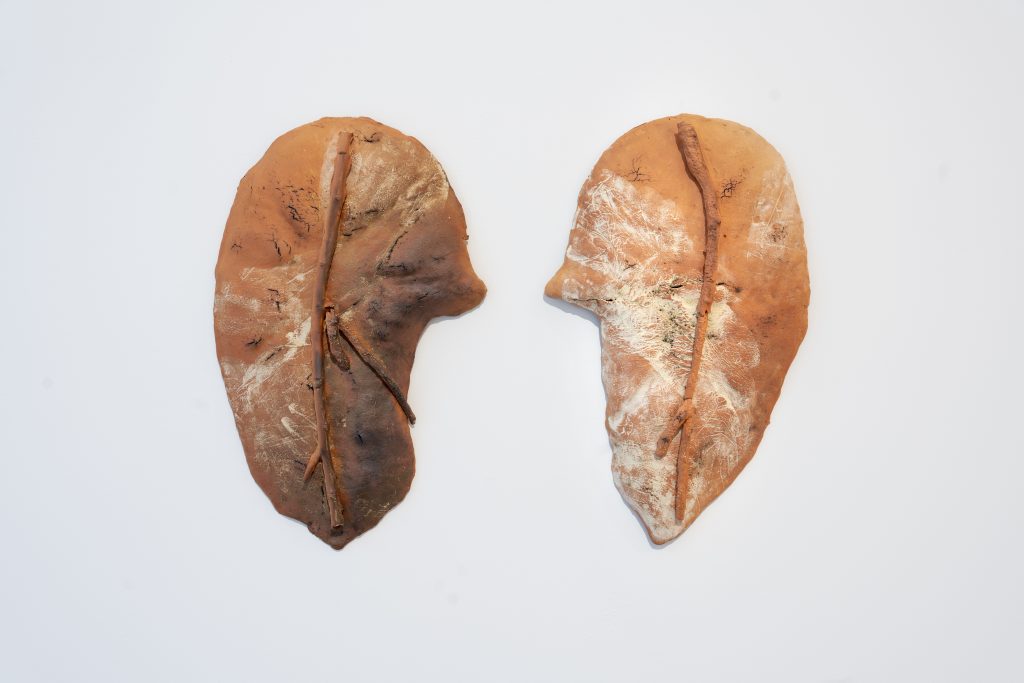 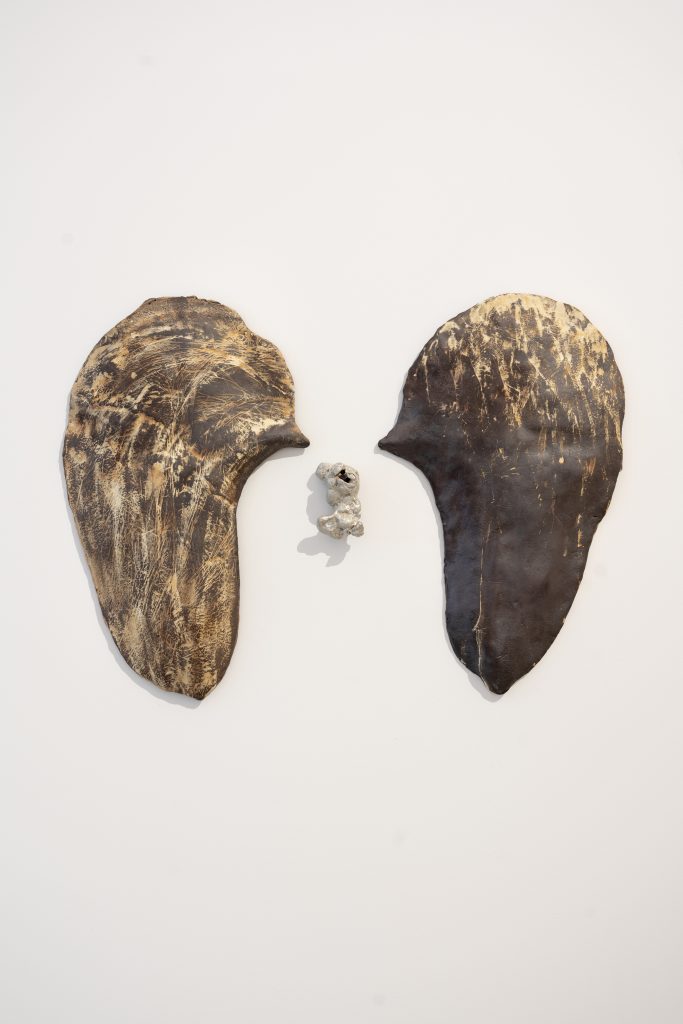 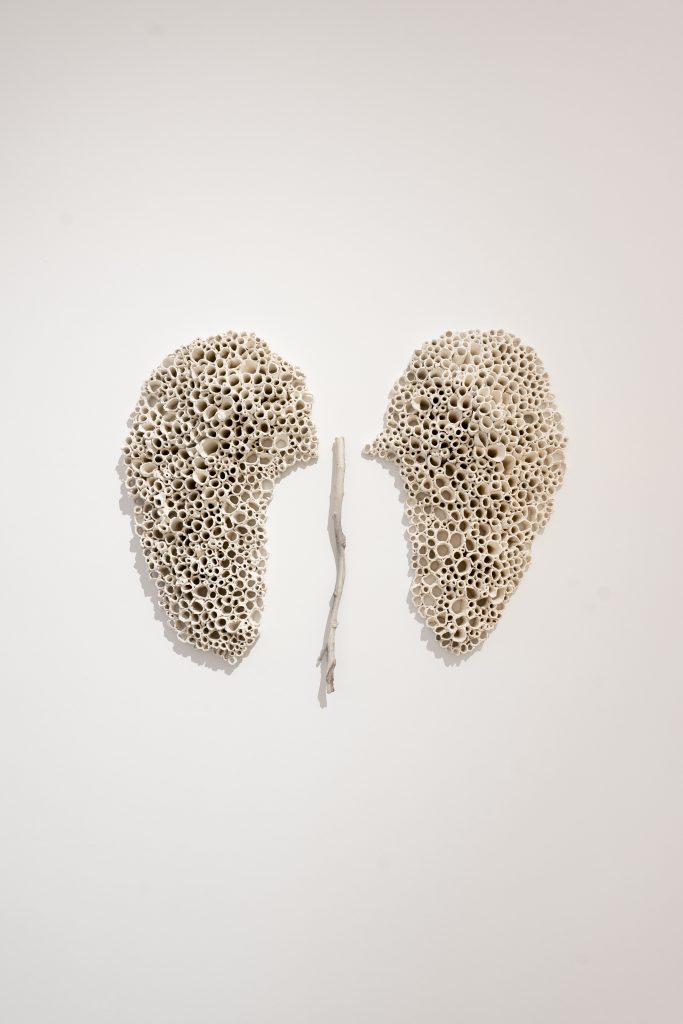 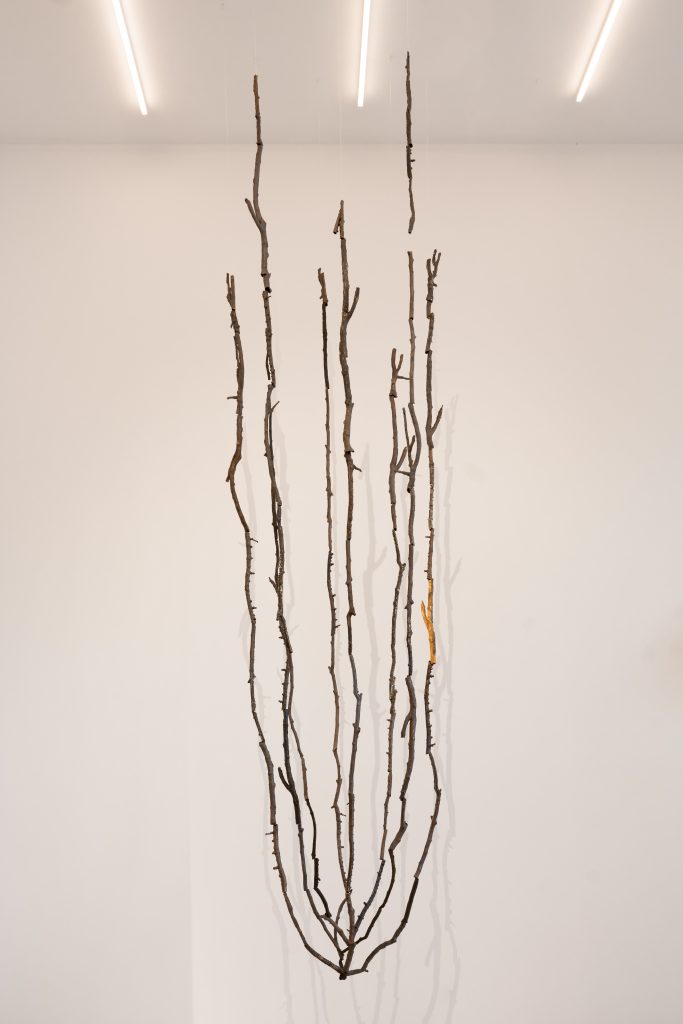 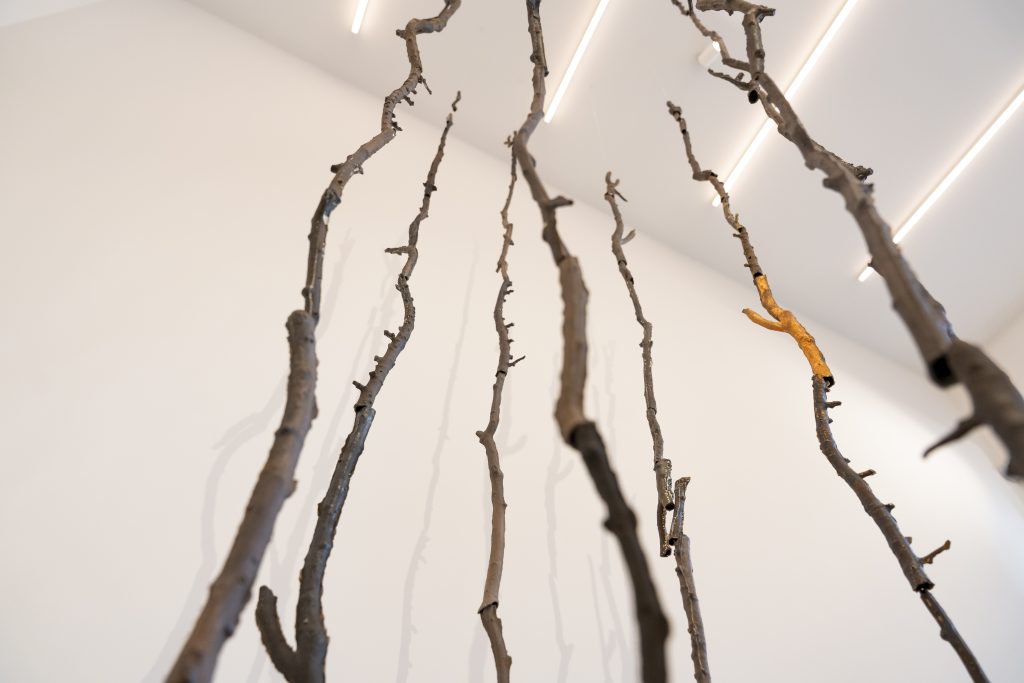 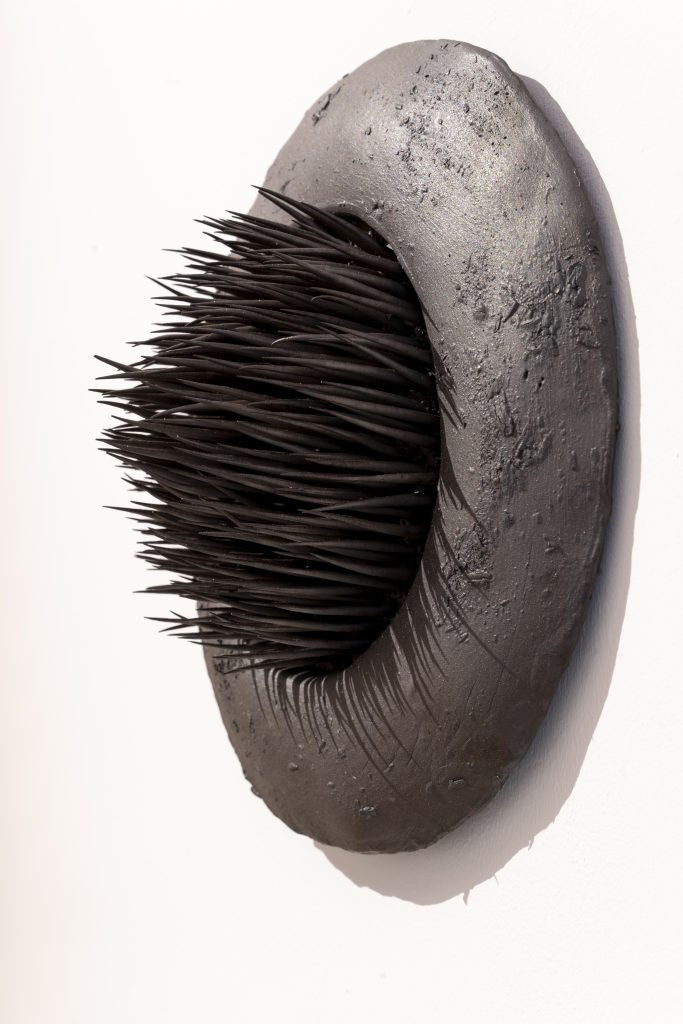 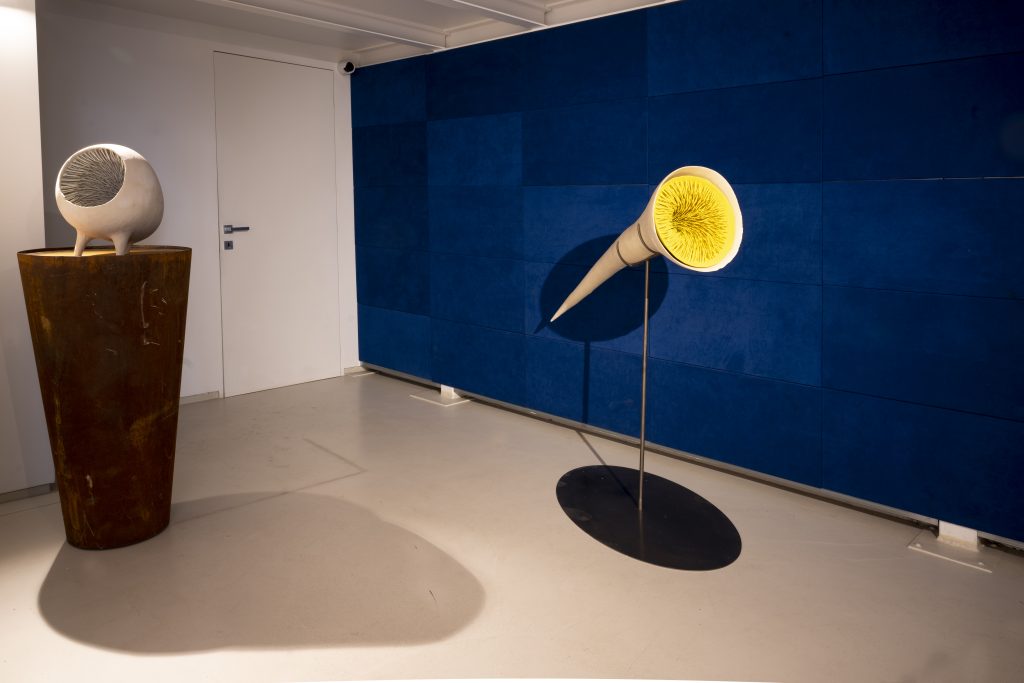 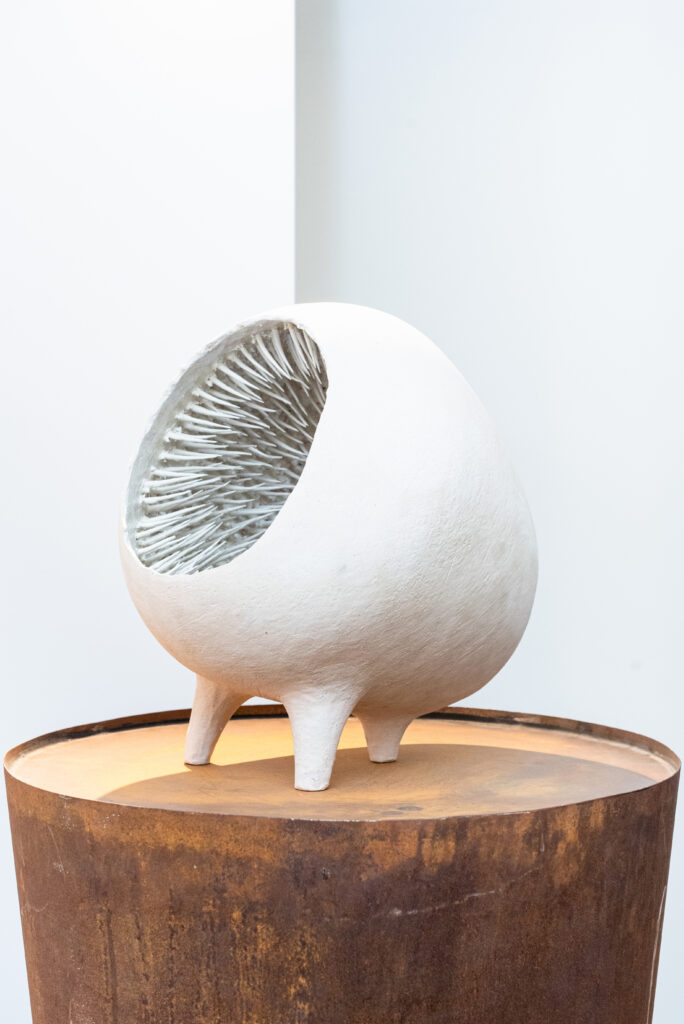 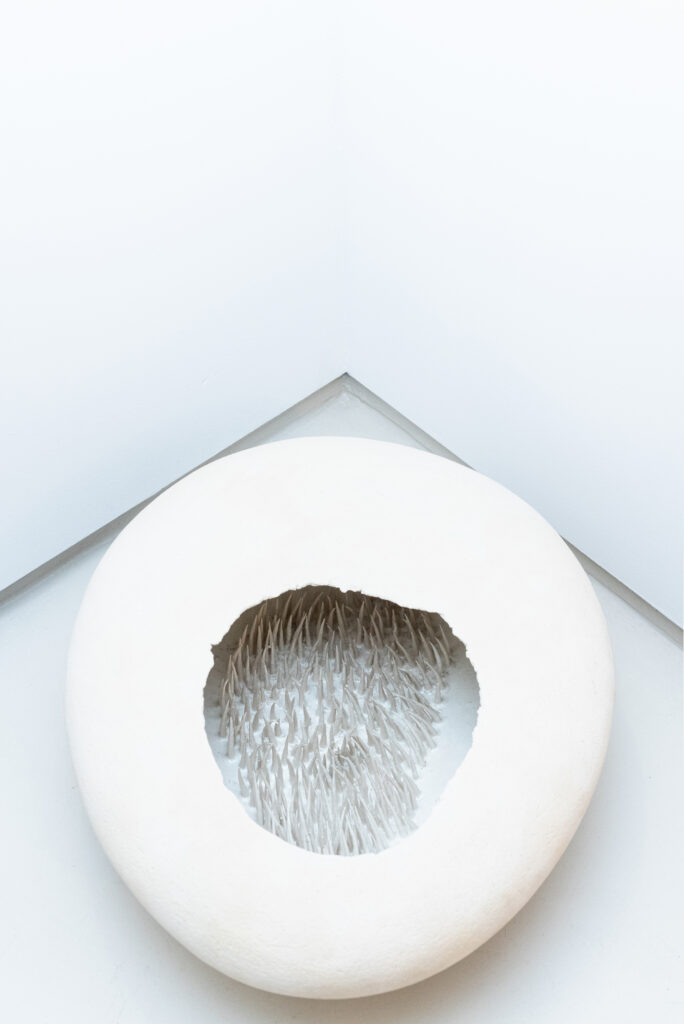 “Tummo, the ability to resist

hidden energy that drives toward the progression of life.

The mouth of the volcano ready to explode.

Pulsing of every cell, every organ, interiority expanding, powerful vibration of breath.

Breath as the only engine.

Tummo is the expression of the pulse that tirelessly endures,

Tummo in Tibetan means inner fire and is a breathing technique that has been practiced by Buddhists for more than thousand years that allows one to survive extreme conditions.

In our increasingly technological society, we often forget to listen to our body as an organism-container, the perfect engine where the strength and energy of our being resides. Attention is placed only on the outside, on the surface, on the image, ignoring and often blocking the most vital, instinctive, and powerful part that is in each of us, the part that connects us deeply with nature. Ana Hillar, for the first time in Italy, is presenting a body of material works and stoneware installations designed especially for the Milan gallery Tempesta, which continues its’ path of investigation and analysis between body and nature.

Tummo identifies a state of introspection, of discovery and listening without prejudice or fear, looking inside and feeling the vital and powerful energy flowing, the perfect functionality of our organs, the continuous transformation. It also represents a willingness to dialogue with nature, a predisposition to listen, to contemplate existence.

Every time we inhale a small revolution is happening within us, overwhelming cells, blood flow, brain activity, nervous system, all triggered thousands of times throughout our lives by such a natural and unconscious gesture as the act of breathing.

In this project the starting point is the earth, the primary dwelling element and birthplace of life, which allows Ana Hillar to approach listening to nature as a whole, drawing an analogy between humans and the life forms of our planet. The environment, the forces that move the flows of rivers, the vigor that releases a seed, the latent energy in a volcano, the photosynthesis of plants, are comparable in all to the functioning of the human organism as a whole. These are just one example of adaptation to the extreme conditions to which man and the planet, due to urbanization, are often subjected, demonstrating a strong and spontaneous capacity for resilience, and in nature, even rebirth.

“Taking material from the earth, making use of ancient techniques, such as wood firing, knowing how to guide the fire to witness the necessary transformation is fundamental in my research, bringing me closer to the roots of an ancestral culture that belongs to us. Not delegating the transition to the automatism of technology, to the convenience of a computerized kiln, watching over the fire for about 10 hours, checking the color inside the kiln, waiting for the time of amazement. The direct dialogue with the material involves a slow and long process, one could compare it to the cycles of agriculture, the gathering of material, preparation, slow and progressive development of the form, drying and finally firing. Like a mantra, it marks time slowly and repetitively. First there is only an emptiness, the perception of emptiness, listening. Building around the emptiness with the rhythmic cadence of the internal beats of the body, a constant repetition of the gesture, like the breath, 13 kg of air that we let flow through us every day without even noticing. Tummo is the expression of the beat that tirelessly endures, persists and repeats itself,