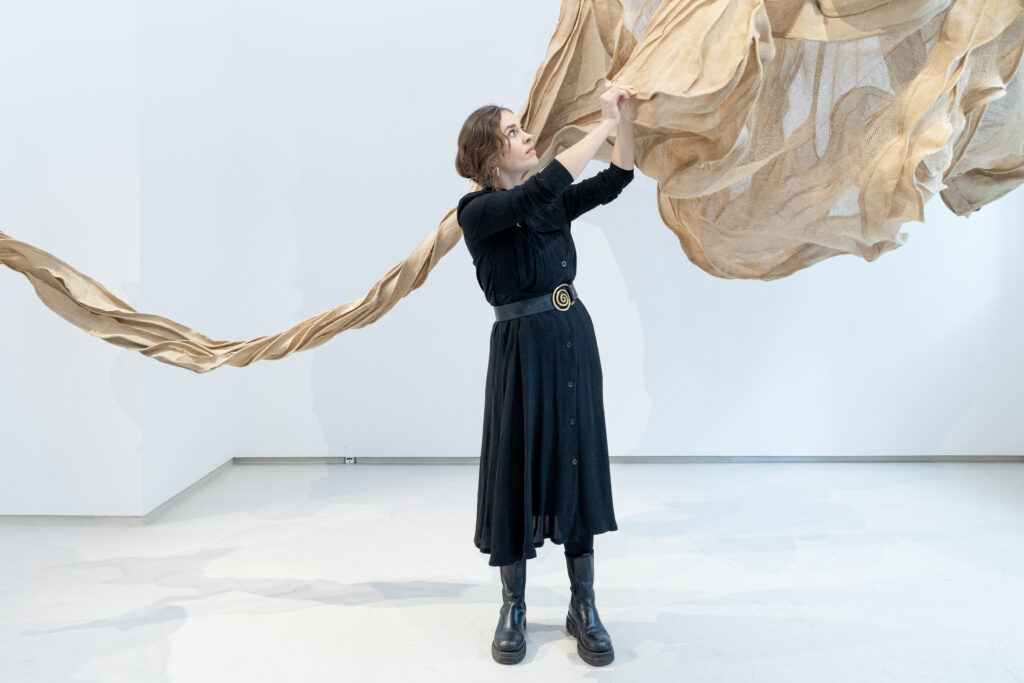 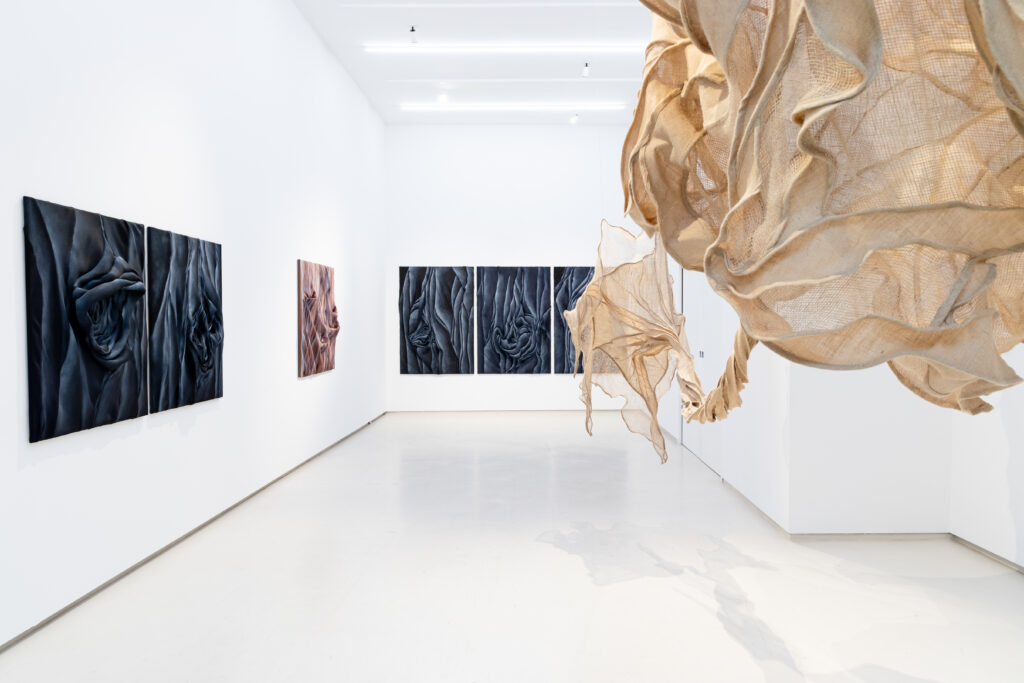 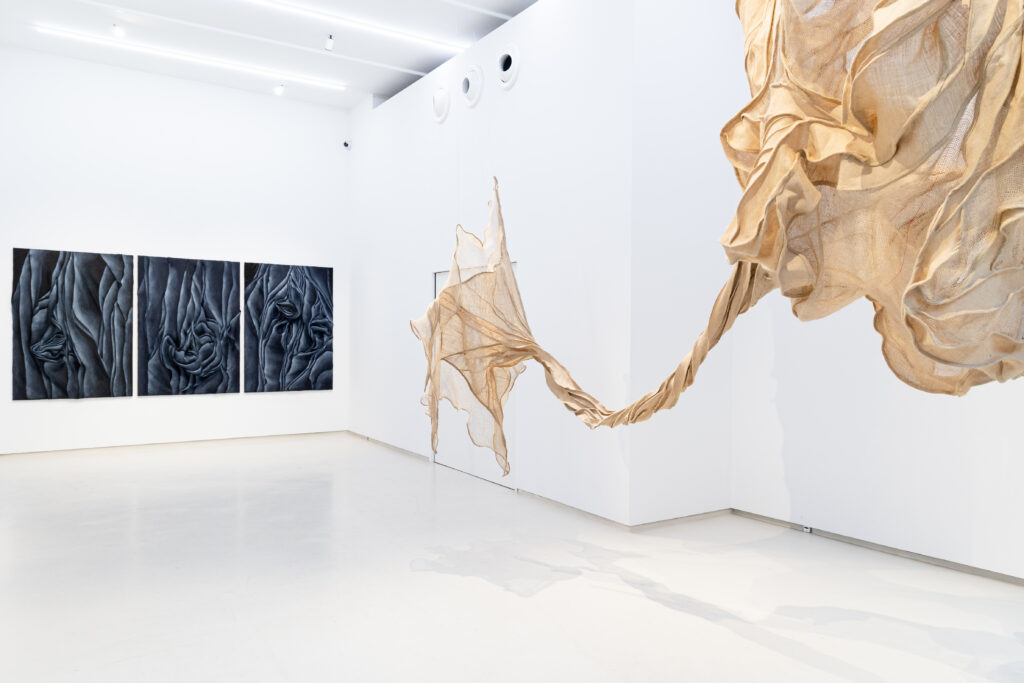 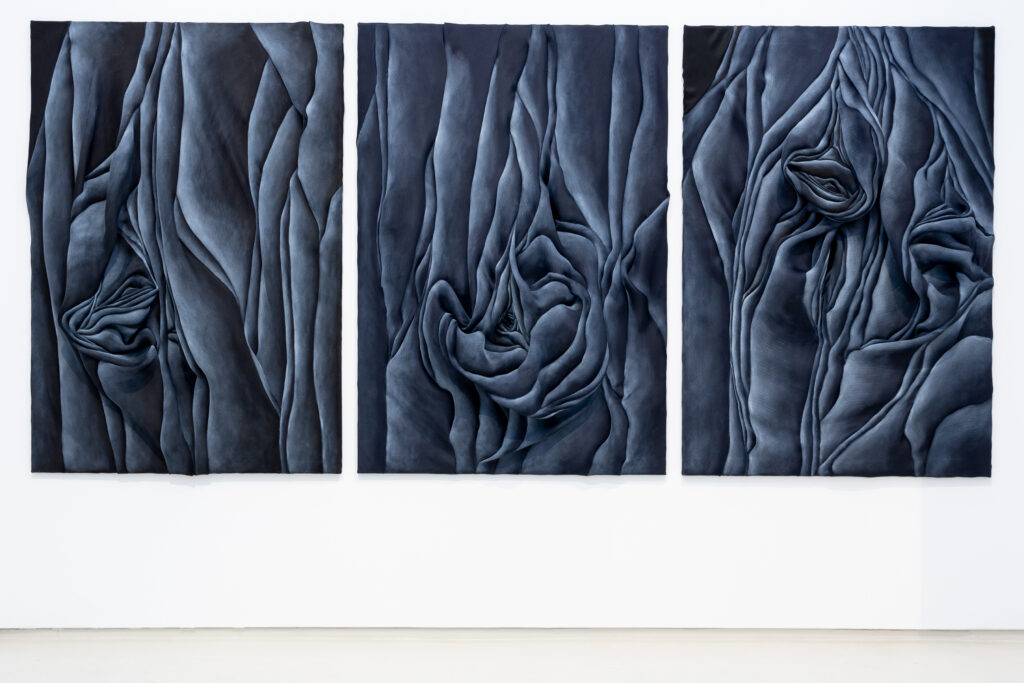 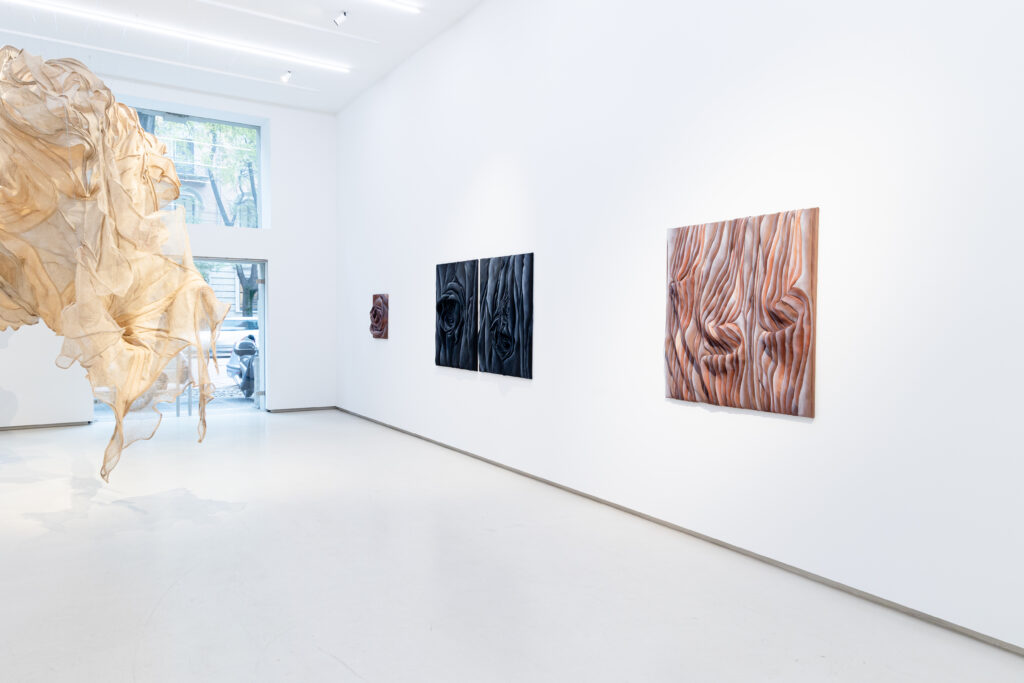 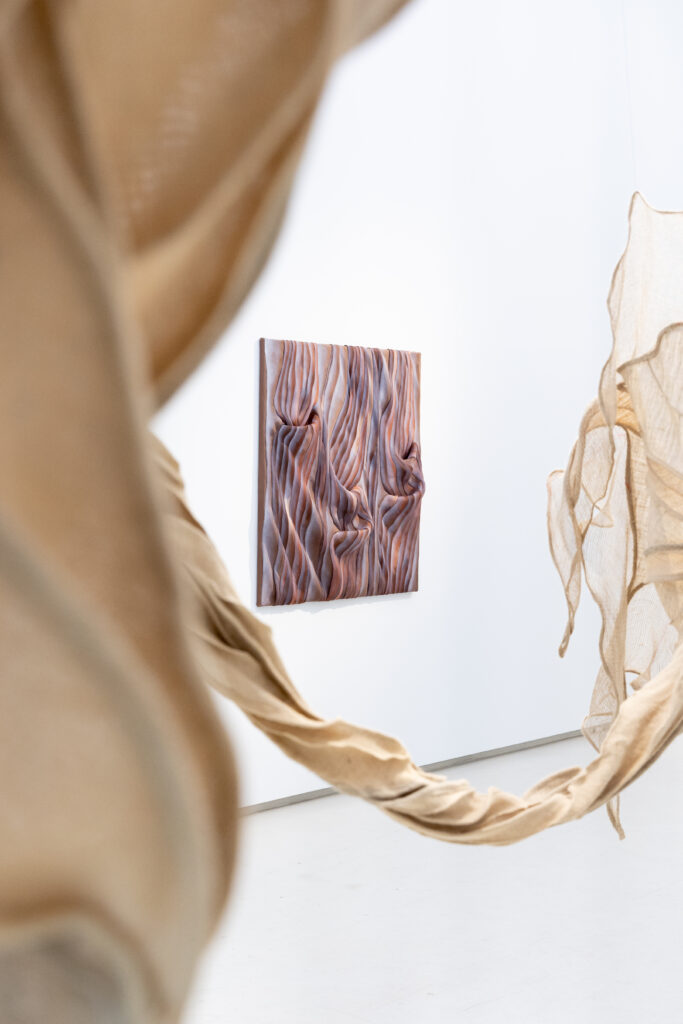 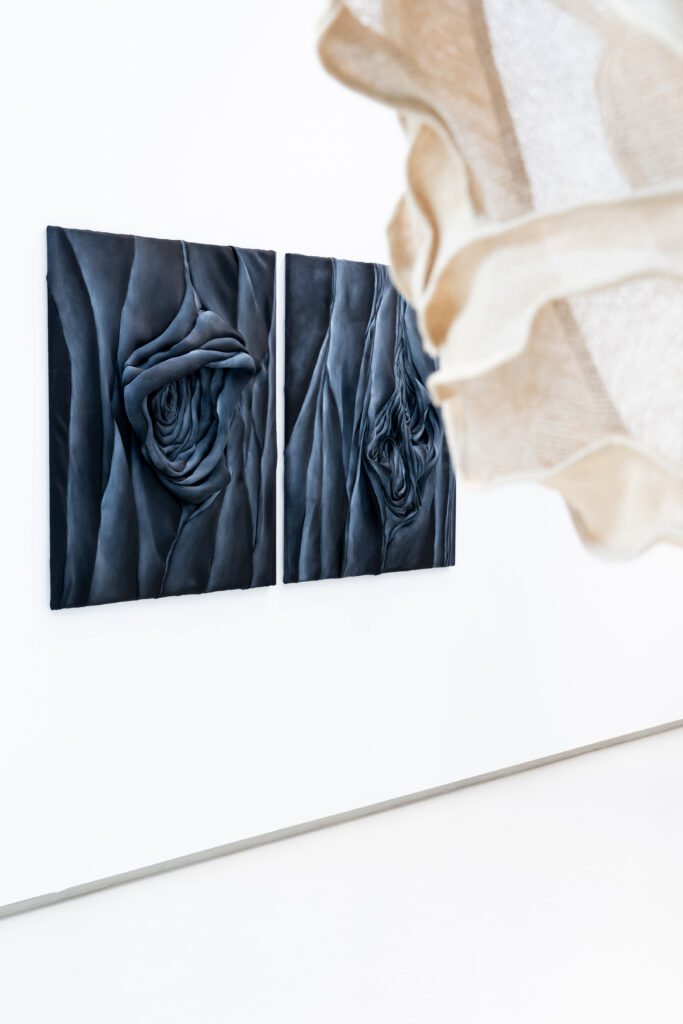 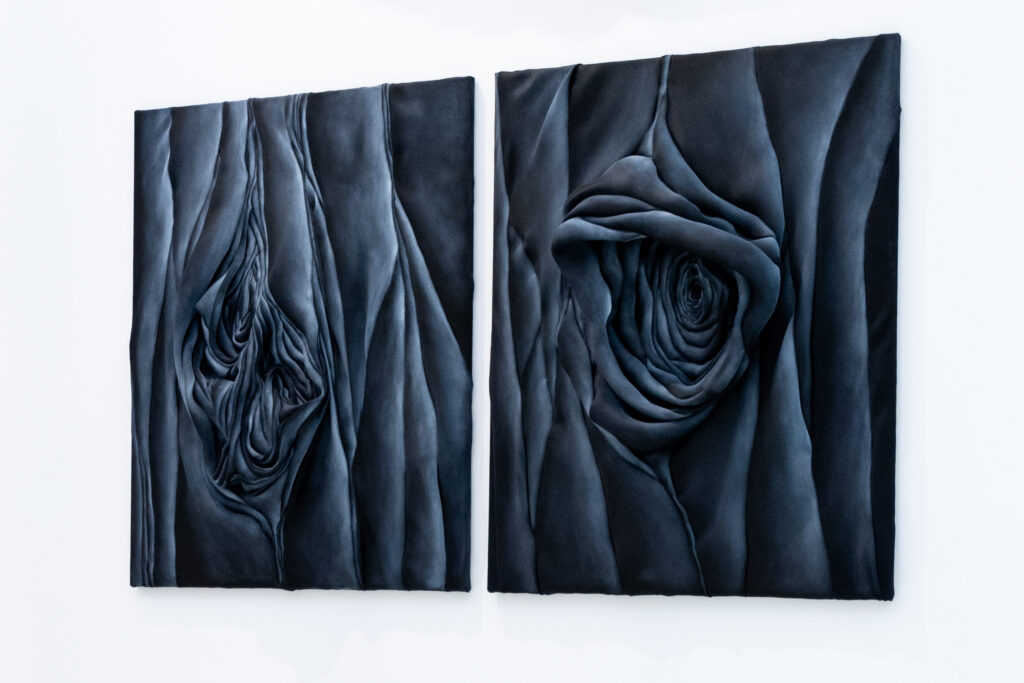 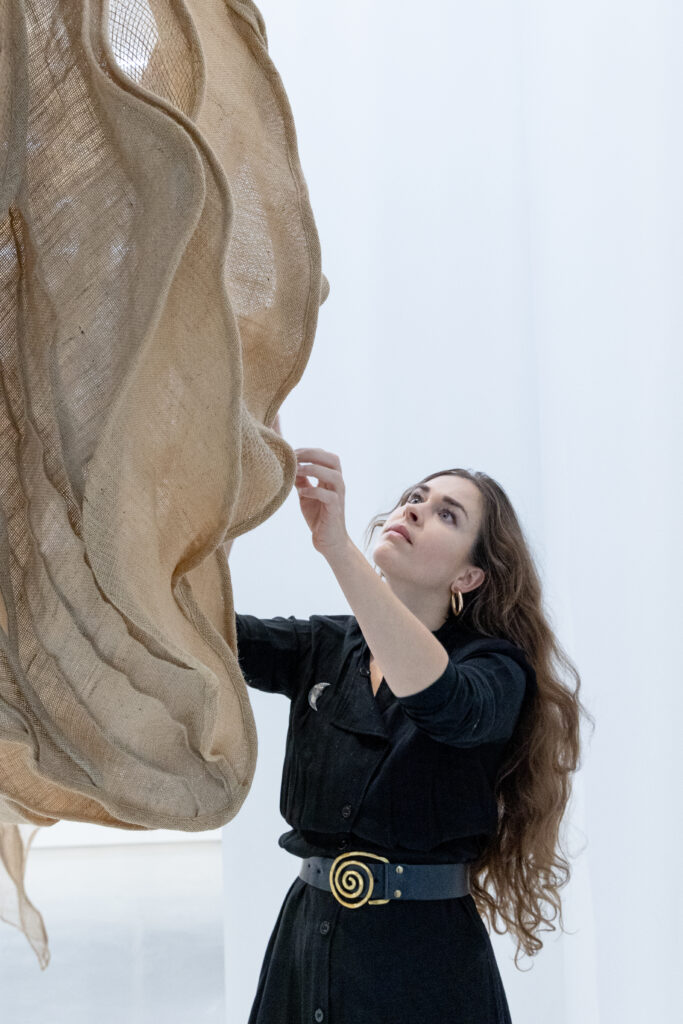 Diana Orving, during the “Becoming” installation at Tempesta Gallery, 2022 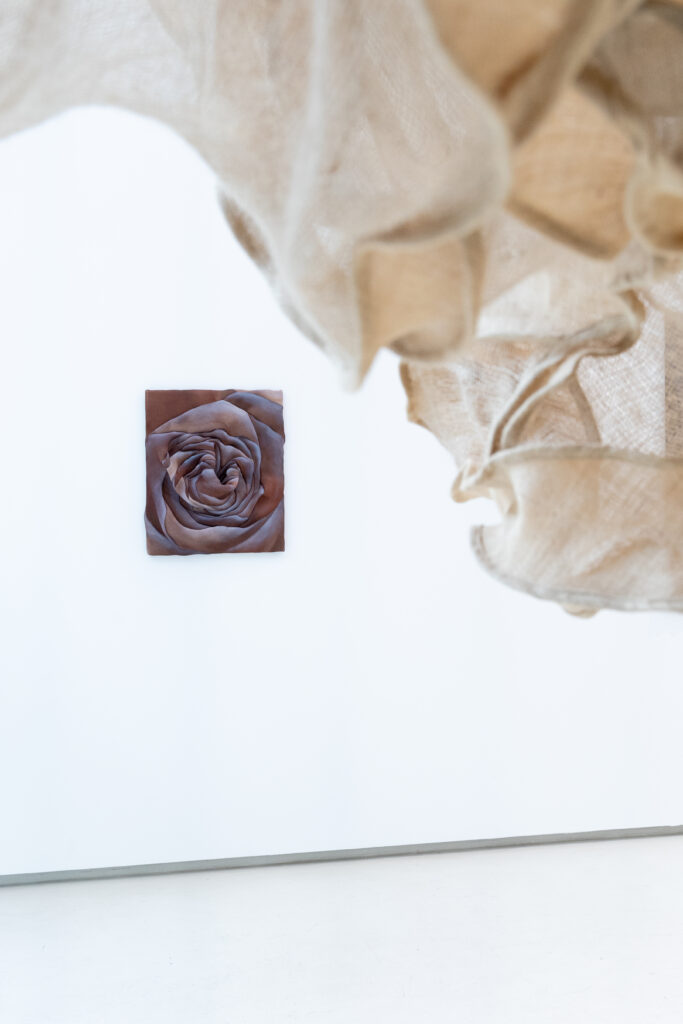 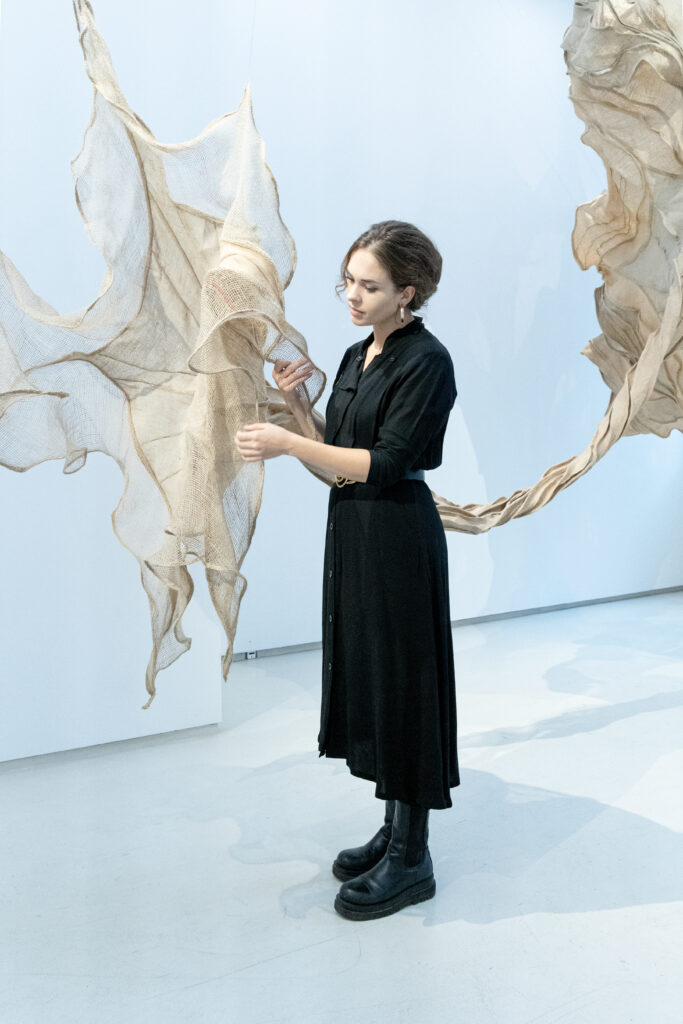 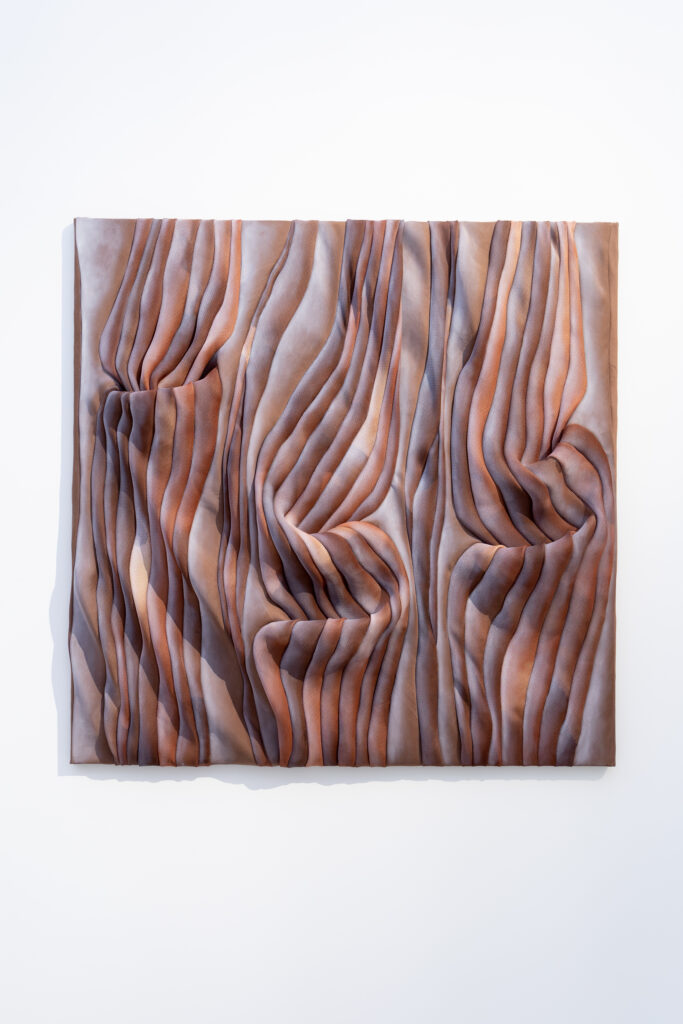 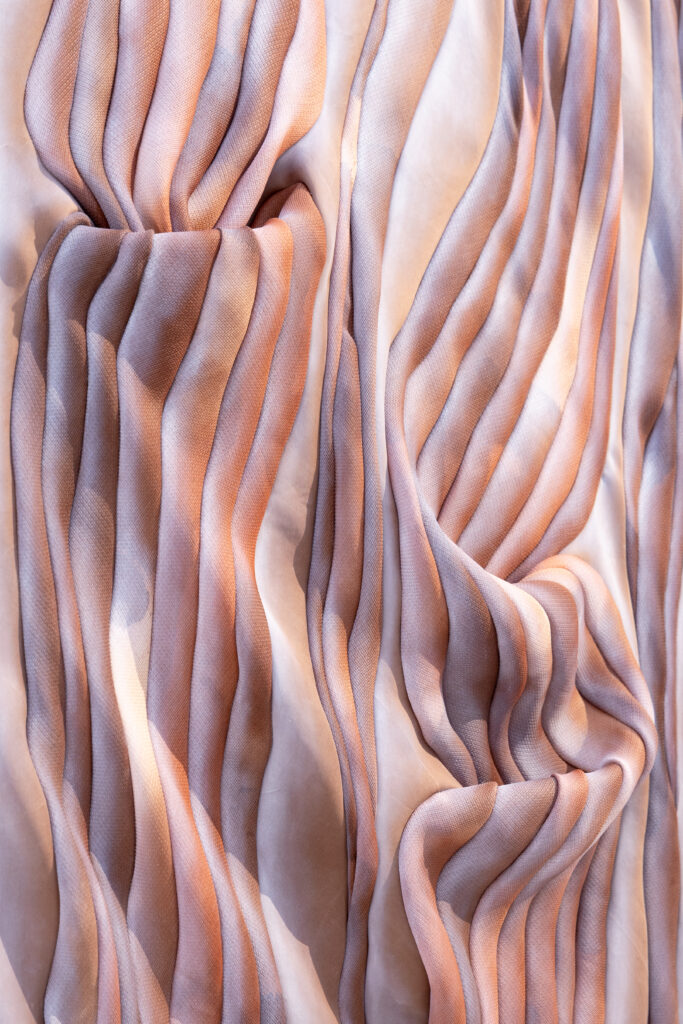 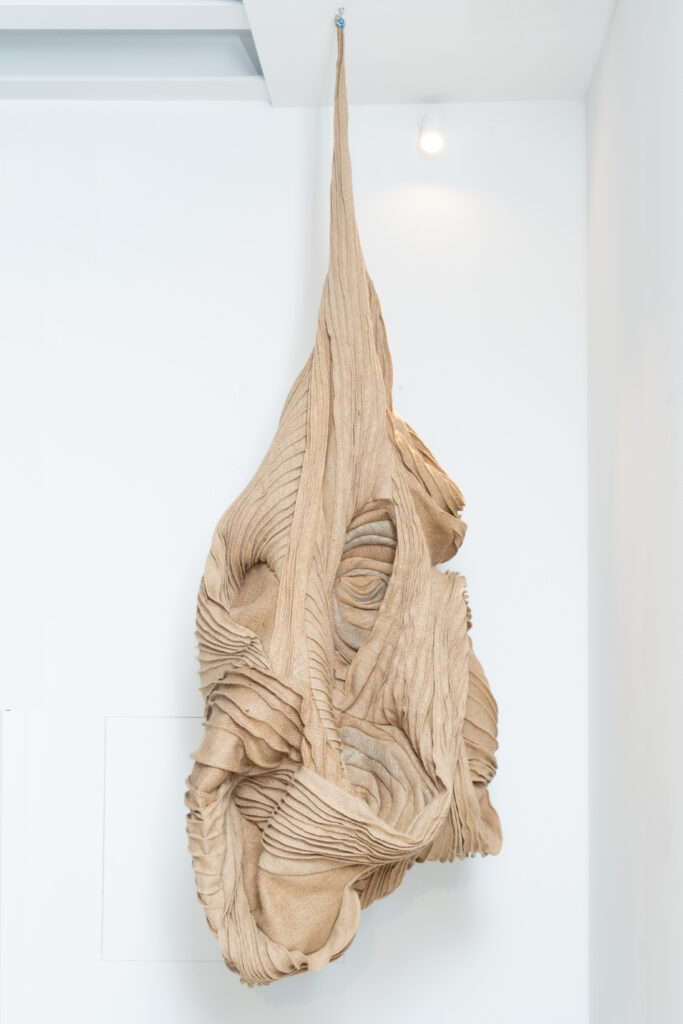 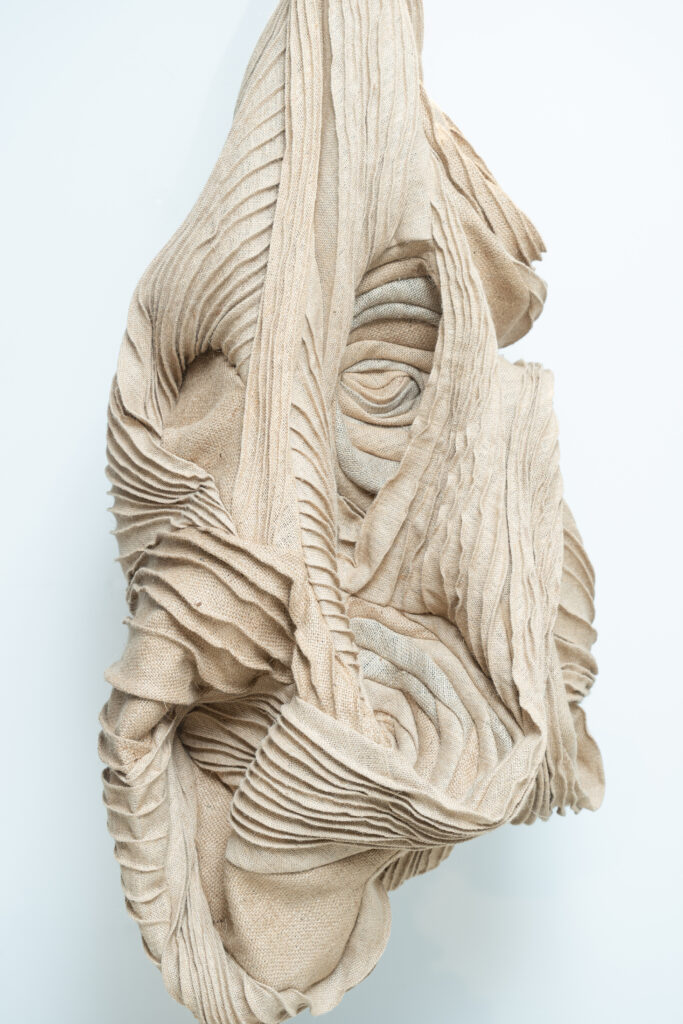 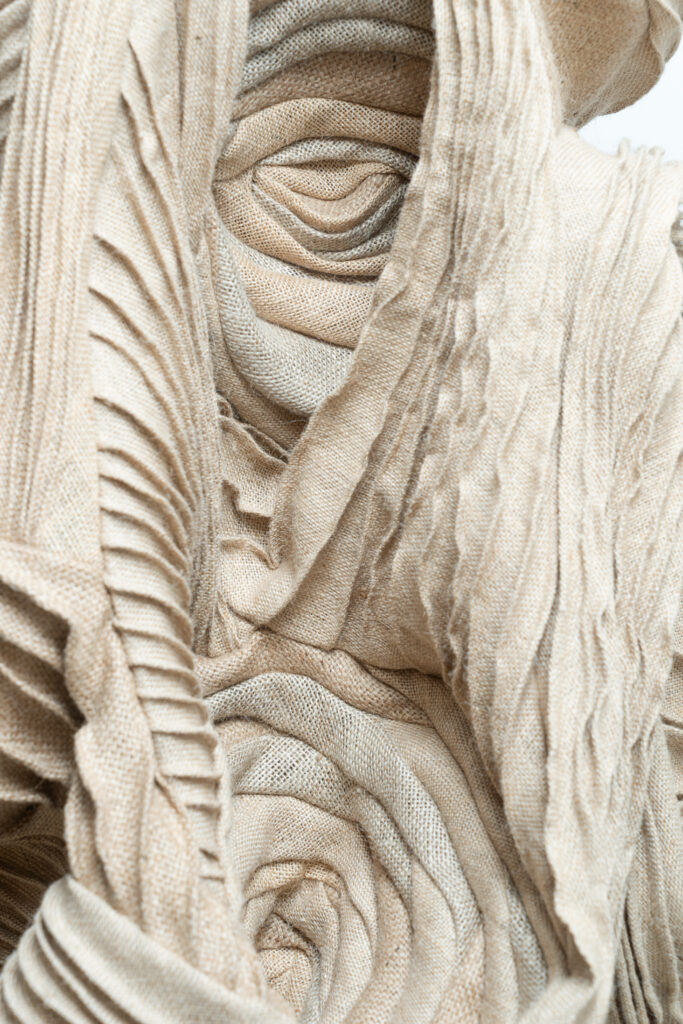 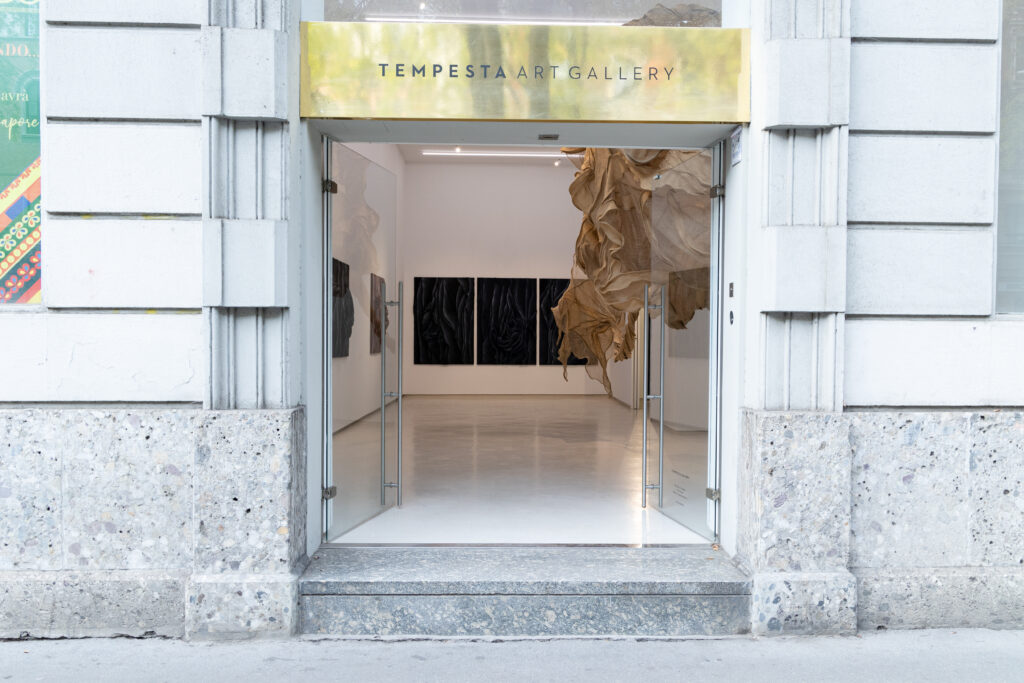 INTROSPECTION
“I understand form through my hands and look forward to the intersection where feeling and thought meet. I use form and movement to both express and understand states of mind, the dynamics of relationships, mental and physical processes. For me art is a spiritual tool and a language that sometimes communicates on a deeper and more instinctive level than words alone”. Diana Orving
Tempesta Gallery is pleased to announce the Swedish artist’s first solo show in Italy on November 24, 2022.
After years of discovering and exploring the possibilities of textile materials as an art form, Diana Orving is now taking her artistry one step further. In her new work Becoming for Tempesta Gallery she has created a giant hanging shape, a form of textile sculpture resembling a giant placenta, the tree of life that all comes from, embodying the link between mother and child. It is composed of a variety of jute qualities, from light see-through weave to dense and stiff qualities of the biodegradable textile. The shape of the human placenta, that gives life to the growing human body, is also the shape of the trees that give life to us all, the lung and earth connector of the earth body.
The materiality of her work is central, with subjects ranging from the ephemeral and light, almost flowing of her previous art pieces, to the darker, heaviness of the jute. The creation is a form of collaboration between the material, the motif and the ideas, all merged in together. The large pieces are full of mobility and movement, an intrinsically fluid aspect that the artist herself describes almost as a form of choreography. Improvisation and intuition are central aspects of her artistic process, that often is expressed through a form of exploration, an on-going dialogue between her and the works. It is almost as if they have a life of their own, with pieces such as Observer I, II, that feels almost like they are looking at you. “I often feel observed by the pieces in my atelier. I feel their presence, – they have freed themselves from their frame and stretch out towards me, following my every move”, says the artist.
In her sculptural framed works, titled Presence I, II, III, we get to explore the moving landscape of something resembling the female body, an intimacy between the fabric and the skin, folding like sand in the desert, like waves of the ocean. The textile sculptural paintings made of silk, painted with oil, seem to  pulsate and breathe, liberating themselves from the constraints of the framework. Textile art meets sculpture, meets traditional framed paintings. “In the textile works mounted on frames, I look to create a field of tension and intimacy between the piece and its viewer. A landscape to get sucked into, or a volume that makes you want to touch it,” Orving herself explains.
The female body, and motherhood has been a theme of Diana’s since the birth of her first child, and she went through her second pregnancy during the process of Introspection, a form of co creation between with her own bodily and mental transformation and the work that came to life through her fingers: ”What I wanted to express was my emotions and sensations in the ultimate form of intimacy and loss of control. I experienced that there is knowledge in your body that goes beyond what you could intellectually comprehend. The intrinsic lightness of the fabrics made it possible for me to  create these large scale volumes. The larger they grow, the less in control am I. It is almost like creating a new organism that force me to cross boundaries and limitations.”
Diana Orving (1985) is born in Stockholm, Sweden, and had a successful career as award winning avantgarde fashion designer (amongst others Elle designer of the year), with a brand under her own name, before her artistic work turned more into pure art, where she has spent her time, as a full time artist during the last two years.
She works associatively in an exchange between techniques, materials and formats such as textile sculpture, painting and costume when she investigates the symbiosis of the tactile and the visual, of the body and space. Diana Orving is self taught and develops her own techniques. She chooses the fabrics that she refines in different ways, by dying and washing the materials several times to obtain specific textures and effects. She works mainly with high quality natural fibers such as cotton, hemp, wool and metal fibers from stocks of left-over material, using existing and sustainably recycled material.
She has exhibited her work in major shows at Varbergs Konsthall, Sven Harrys Konstmuseum, Galleri Arnstedt, Nordiska Galleriet Art in Sweden, amongst other places, and has created site-specific sculptural art drapes for Guide Michelin star restaurant Aira in Stockholm. This is her first solo show in Italy.
DIANA ORVING
INTROSPECTION
NOVEMBER 24th – FEBRUARY 24th 2023
TEMPESTA GALLERY
FORO BUONAPARTE 68, MILANO
INFO@TEMPESTAGALLERY.COM
Questo sito utilizza cookies (tecnici e analitici, di prima e terze parti) per garantirti una migliore esperienza di navigazione e di servizi. Se vuoi saperne di più o negare il consenso a tutti o ad alcuni cookies, consulta il link: Cookie Policy. Per maggiori informazioni sul Trattamento dei dati: Privacy Policy. Cliccando sul pulsante accetta acconsenti all’uso dei Cookies.
Cookie settingsAccetta
Privacy & Cookies Policy